Points, objectives, tasks, initiatives, projects, destinations, alterations, changes, transitions, reformations, transformation all equal the same... goals.  Each of these represent things we would like to achieve.  Sometimes just observing it becomes overwhelming and we loose the ability to see successful implementation.  Other times, we over think our approach - the "how" or method by which we will achieve that which we desire.  It cripples us and stops us from accomplishment because we simply do not realize that we each possess the power to make it happen.

The Power of ONE

Last week, I was fortunate to experience this first hand.  I watched Suzanne "Africa" Engo's documentary "I Love Africa"*  which chronicles her journey to raise Aids Awareness.  I met Africa through social media without any prior knowledge of her "power".  I immediately found her to be a bright, shining light, humorous and an inspirational raw vegan chef.  What I did not know is that this wonderful human being decided to raise awareness for this devastating dis-ease by dedicating her life to veganism, incorporating fitness, and then move with her power possession, to change the world...and she did it.  She initially started off on a run from New York to Chicago.  The success and notoriety propelled her to then run across the world, from Milan, Italy to Cameroon, Africa on behalf of her cause.  Prior to becoming a raw vegan, she weighed 250lbs. She used her power to transform herself, loosing 110lbs.  Africa then took this power, sharing and spreading it through her infectious smile and positive energy to share with one, many and thus, nations on behalf of her cause.  Her power has become international.  She demonstrates that all you need is you to start using your power.

Africa's added another initiative to her "plate", encouraging Americans to eat healthy and vegan in the National Fight Against Obesity.  As a raw vegan chef, she loves to keep it simple.  Here is my take on one of her dishes: 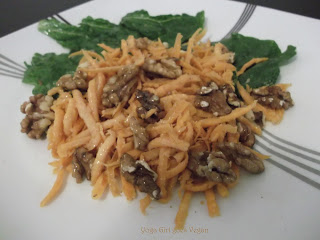 *for those in the United States, the documentary via this link:  I Love Africa, is avail for free viewing until the end of the year at which time it will be produced into a DVD for international distribution.   May her story inspire you.

Power to say NO

Sometimes, you don't need power to start something new or to transform the world  Sometimes, you need the complete opposite - just a little power to change an element in your surroundings for your well being. Sometimes, you need to possess the power to say "no". Many of us are people pleasers.  I am guilty.  For many years, I worried about providing the right answer, the right solution for acceptance or judgment.  So, I always said "yes" to people, situations, and things that I should not have.  It wore on me down both professionally and personally.  Everyone else was happy because I took on their projects and goals. I made it happen for them.  Yet, I was not happy.  I had not taken the time to please myself.  I had not said "yes" to me.  It was  not until I learned how not to be co-dependent, that I learned how to say "no".  Sometimes, if we remember to say "no", we will remember to say "yes" to those elements we need for our well being:  air, sun, water, freedom, tranquility, positive energy, and light, each of which empower us to be the best we can be.  Begin to say "no" to situations and things that drain and wear you down - that steal your power. Regain possession, realize there is a difference between giving and doing with selfless humility and giving away that which fuels you.  Initially, practice saying "no".  It's okay - the world will still be standing after you say it.  Look into the mirror to see how you look saying no.  As you say it, observe how your jaw bones move. "Feel" it physically.   After you say it, smile and remember that in order to achieve your goals, sometimes you have to say no in order to say "yes" to make things happen, and that you must first realize that not only do you possess the power to do so, but that YOU are the only ONE who can, and the rest of the world will follow. 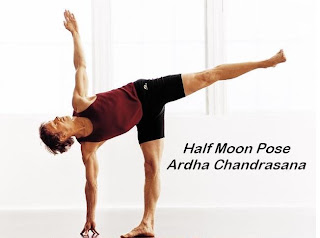 Highlights the power of one.  It is an alignment or standing pose in that improves balance, flexibility and anchors grounding of legs and ankles.  The possession of this one pose, is powerful enough to strengthen the core of the entire body.
Posted by Yoga Girl at 2:05 PM No comments:

I have come to the realization that your environment truly effects your wellness.  If what surrounds you is desolate, it will lend to feelings of destitution.  If you alter the picture to create a personal space of light, you will brighten that which initially began as darkness. This simple action infuses energy into any place devoid of positive aura and empowers you to reverse or reject negative vibes that threaten your success.  Changing environment can be as complex as moving to another part of the world,  seeking other employment, loosing or gaining relationships, or as simple as painting your bedroom a calming color, planting flowers outside your window, or smiling at one who frowns.

I found that this also applies to your workplace.  What does your work environment look like?  Is it conducive to your well being?  Does it allow you to be the best you can be?  There are many things in our specific  jobs we can not change:  who we work with, the times we work, the tools we need.  However, there always is something that you can do to make your environment work for you, to embrace your productivity and to foster your creativity whether you paste a flower inside of your hardhat, post a picture of your favorite oasis on your dashboard, or wear a smiley face pin on your lapel, there is always a way to remind yourself to just "be" in your moment within your environment, doing the best that you can with positive flow.

I work from home at a desk.  My "office" is painted in a warm tone which reminds me of cinnamon spice.  I love the taste and aroma of cinnamon.  It makes me"feel" warm.  I have pictures of goals and family members, a meditation stool, and full, uncovered windows which welcome open views of trees and the sky.  I created my space to be calming to allow me to be "me".  Sometimes however, we forget these things when we set about our tasks.   As like most people, when I am working,  can not always look around my room to "see".  Sometimes I need tangibility right in front of me. So, I remind myself, each day.  I used my desk to create a mini-environment within my larger one: 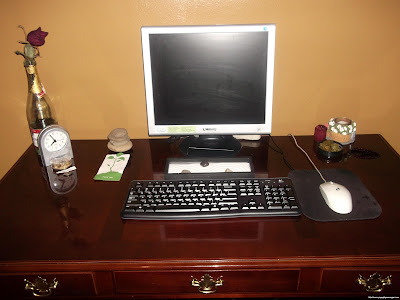 My desk is strategically set with subliminal messages to massage my spirit and thoughts to remind me to be calm and free as I work.  It is divided into three areas:  inspiration, relaxation, and meditation.  I believe that you can not have one without the other.  One can not meditate if one can not relax and one can not inspire if one can not become grounded through meditation.  The combination of these three elements lead to creativity.

The first portion of my desk is Inspiration.  It reminds me to: 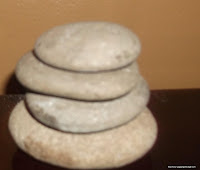 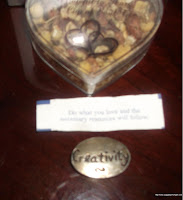 remember I  possess
the resources I need

When I reach a blockage in the flow of my work, I always look to inspiration  for empowerment.  With exhalation, I am ready to forge forward to complete the tasks at hand.

The middle section of my desk is Relaxation. 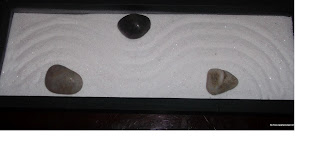 When stressed, I take out a little rake and make waves in the sand.  This zen based activity is very soothing.  This relaxation exercise is intentionally placed in direct correlation above the keyboard.  It reminds me that nothing is more important that a relaxed spirit for you will not be productive nor rational if you are not able to approach your situation with a calm demeanor.

The anchor of my desk is Meditation. 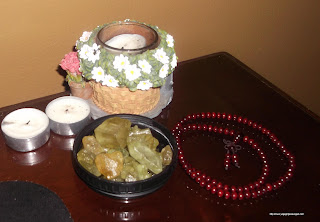 It is the grounding basis for which I can be the best I can be.  It restores positive thought, removes doubt, and increases flow for creativity.  If I have an arduous task before me, I light a candle, take a whiff of crystal  rocks that have been soaked in citrus and flower scented oils, and pick up my mala beads to either recite a cleansing prayer or recite a mantra for restoration, healing, and power.    I often meditate before I write as I wish my words to flow with truth,  clear conscious and without malice in my heart. Sometimes, I meditate after I work, in gratitude for productivity and for the gift of the skills with which I work.

It doesn't matter where or what your environment "is", whether it is home, work, with whom you interact or otherwise. The question is - does it encourage your progression?  Does your environment encourage you to "be" the best you can be, foster your beliefs, one that can bring a smile to your face, and a warmth to your being?  If it does not do  this, then think about incorporating a few simple things to evolve your environment to that which will bring light, incorporates things you love, create positivity, enhance your wellness and affirm your success.

Namaste.
Posted by Yoga Girl at 2:48 PM No comments: